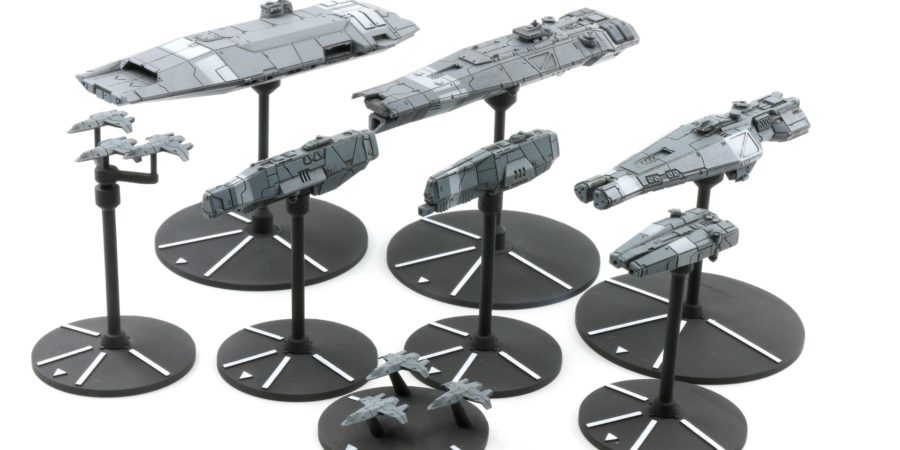 It’s been quite a while since my last post and I’ve had some life events that halted my ability to pursue my hobbies for a couple of years.

However, having finally been able to get a small hobby and 3D printing area set up, I’m beginning to create again and I hope to be posting more regularly.

For the past few weeks I’ve been working on some ideas for a fleet of miniatures for A Billion Suns, a game of starship combat from Mike Hutchinson and Osprey Games that’s rapidly growing in popularity. One of many interesting things about ABS is that they don’t have established factions and official miniatures like many other games. This opens up a lot of possibilities for players to develop their own factions and use models and miniatures from many suppliers to represent their forces.

I think this is going to be a really fun project to tackle since there are 13 different classes of ships ranging from tiny fighters to massive carriers and battleships. So I decided to put pen to paper and create my own set of original designs so that I don’t have to worry about licensing intellectual property should I move forward with marketing them.

I decided to tackle the Destroyer first since it’s in the middle of the size range of ships and I could use it to define a particular design language I would use for the entire fleet. The Destroyer class in ABS has missiles as the primary armament and I wanted a ship that looked fast and deadly, reminiscent of a shark. So the Destroyer took shape and some key design elements emerged during my ideation: snub nose, large slab-like armor plates broken up by smaller details and a bridge positioned similarly to modern naval vessels.

The second ship I designed is a Frigate where I took a different approach and went for a narrower, vertically oriented hull. I increased the detail of the hull armor on this model but tried to keep a consistent family resemblance. I experimented with additional small details such as life boat hatches, docking rings and recessed bays that I might end up taking back to the Destroyer design. I actually went through several other design variations before I arrived at the design shown because they strayed too much from the style of the Destroyer. Those designs might reappear at some point in another fleet.

Next, I went for a smaller design, the Corvette, which is the smallest and swiftest of the capital ship classes. For this design I went back to the horizontal orientation of the Destroyer and moved the bridge up front more like an aircraft to accentuate the smaller size and increased speed of this vessel.

The Monitor design was next, a ship class that is slower and more lightly shielded than the Frigate, but carries a much larger railgun. My original design used a slightly larger and longer keel mounted railgun like the Frigate but it didn’t look distinct enough. After posting to the ABS Facebook group, I received some feedback to emphasize the gun a bit more. Since an easy way to make a conventional rifle look more menacing is to put a suppressor on it, I decided to extend the railgun out beyond the prow of the Monitor, giving it a more distinct profile and really selling the “big gun” image.

During the design process I continually bounce between digital 3D modeling and printing of physical models to hone in on the ideal level of detail that will resolve on the targeted output device which in this case is a stereolithography 3D printer using liquid resin. While the topic of designing models specifically for 3D printing is beyond the scope of this post, I try to balance the detail of the model with the complexity of the support structures that will be required during the printing process that are often tedious to remove and may results in pits or damage when separated from the model in delicate areas.

Below is a photograph of the first three ships I created and painted in a simple navy gray with micro clay wash applied. I’m pretty happy with the results so far!

As you can see, I’ve also designed some custom flight bases that use 3x2mm neodymium magnets to attach the ships to the stands. I’ll have an entire post on the “magnetic interlock” flight stands at some point because the design is very useful and versatile.