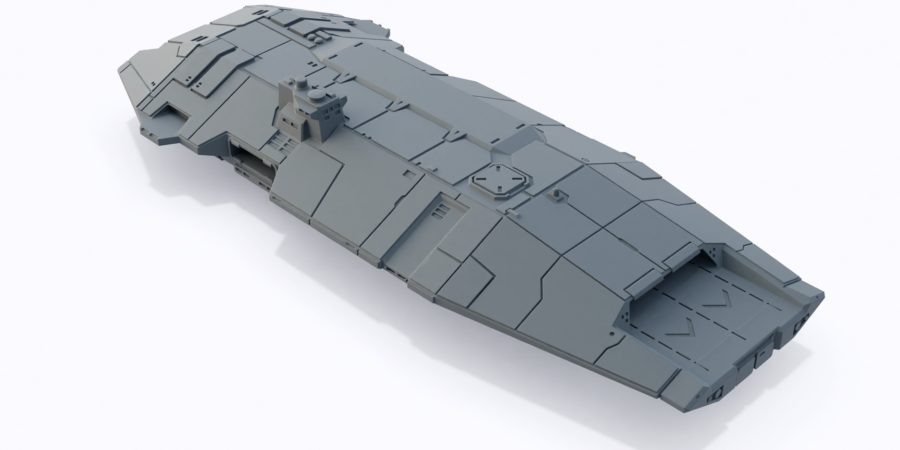 As I mentioned in my last post, I’m working on a fleet of starships for A Billions Suns, a game of space fleet combat. The post is focused on the design of the carrier, one of the larger ship classes in the game.

My initial goal was to create something that was immediately recognizable as a carrier so it needed visual traits that people associate with a conventional aircraft carrier such as a flat top landing deck, flight control tower, etc. However, I didn’t want it to simply look like a seagoing aircraft carrier with big flight engines strapped to it. I also wanted it to appear to be a reasonable design for the realities of space flight.

My initial sketch drew heavily from conventional aircraft carriers with a flight deck the entire length of the hull with the principle differences being that the primary flight deck was enclosed and there would be additional landing pad areas atop the hull and docking bays on either side.

A couple of problems with this design became apparent as I considered it more closely. One is that inbound craft will be flying into the engine emissions of the carrier as they approach. I also realized that fighter craft can easily match velocity with the carrier and don’t require high speed approaches to maintain lift like aircraft, so they wouldn’t need a conventional landing strip with arrestor hooks and the like to slow them down. Thus, small craft can slide up alongside the carrier and then enter the landing bay in a controlled manner.

This helped guide my subsequent design iterations towards a design with landing bays to either side of the hull to keep inbound craft out of direct alignment with the carrier engines. A large launch bay at the bow features multiple launch lanes with catapults that would allow fighters to avoid igniting their engines inside the enclosed hangar bay when launched.

Since these models are most likely going to be printed on consumer-grade MSLA 3D printers, support structures and their removal are part of the process. To minimize blemishes due to support removal, I separate the engines/thrusters into a separate “engine block” which plugs into a matching recess of the hull. This allows for supports to be concentrated on surfaces which will be hidden when the parts are mated together. This does require that the model be oriented vertically on the print bed, which causes the prints to take longer than if it were oriented at an angle.

I’ve found that by carefully planning the geometry of the model, I can minimize the number of supports that are required.

Another approach I use is to minimize fine detail on the bottom hulls to allow for more flat areas for support placement. This is useful when the model is going to be printed at an angle.