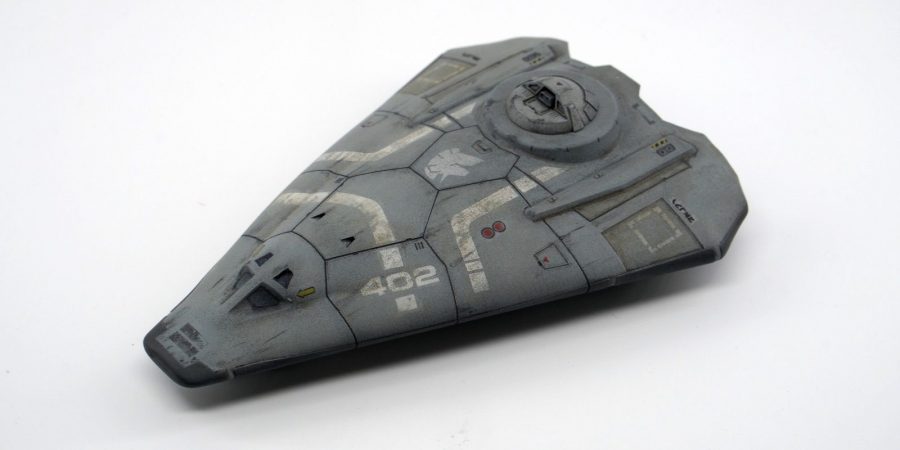 Taking what I learned from the previous model, I created an updated version of the Type S Scout/Courier model with the aim of improving detail in key areas as well as adding features to improve the “paintability”.

It’s also the first time that I attempted to create my own water-slide decals.

This model depicts a fleet courier, part of the Imperium’s 193rd Fleet, based in the Deneb Sector. This craft shows the wear and tear of heavy action during the Fifth Frontier War and has the “Bridled Steed” emblem of House Aledon emblazoned on the hull, denoting it was based out of a Regency Naval Base after Archduke Norris Aledon’s elevation to commander of the Imperial forces in the Spinward Marches in 1109.

Improvements to the 3D Model

I made a number of changes based on what I learned from the previous model.

I exported a scaled 2D vector design of the model and brought that into Affinity Designer to add hull markings and text.

I then created airbrush painting masks for some of the larger elements like the hull stripes, unicorn emblem and cargo bay markings. For the smaller elements such as arrows, circles and hazard bars, I printed these on laser waterslide decal paper.

Since it’s impossible to print white on a laser printer unless you have Ghost White Toner (which I have on order), I could only create decals for the smaller markings that didn’t have white in them. Unfortunately, without a white backings, the colors (beside black) are translucent and appear desaturated on darker surfaces.

I also failed to use a decal setter, so some of the decals “silvered” when clear coated later. I picked up some Micro Set and Micro Sol to hopefully remedy this situation in the future.

One Reply to “Naval Fleet Courier”