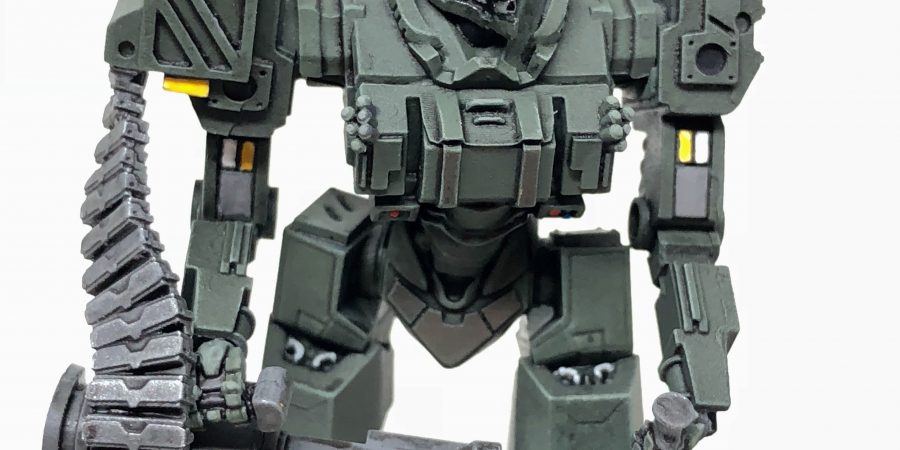 This is one of the larger models from White Dragon’s line of Marine Tactical Unit 15mm miniatures. There are currently three weapon variants: cannon, chaingun and railgun. The version pictured below is the cannon variant.

The model is cast from resin and is very accurate with minimal mold lines and flash. Assembly is a bit tricky to ensure that the ammo feed, cannon and arms all align correctly, so it took a little experimentation and dry fitting.

During assembly, one of the “toes” on the left foot broke off and it took a while to find. Luckily, I was able to drill and pin it for a solid fit. Another issue I encountered was that the cannon was warped and it took a bit of immersion in hot water and bending to get it straighter. It’s still not perfectly straight, but I didn’t want to risk snapping the cannon in half.

The model comes with two head variants, one being very minimalist and the other (pictured here) has more details.

The design of the model is great, with an angular, functional aesthetic that reminds of the mechs from Front Mission and Metal Gear Solid. Lots of great details like smoke launchers plus optional parts like a radar array that sits atop the module behind the head. I chose not to use the radar array and instead put a long boom antennae to the left of the head.

I went for a monochromatic color scheme using Vallejo Panzer Green with little dashes of yellow, white, pale gray and olive drab. I’m currently awaiting decals so that I can finish detailing the model out. I pinned the model to a Secret Weapon 40mm base.

I also have the chain gun version of the Proteus which I haven’t assembled yet. I may experiment with a camo color scheme for that one.