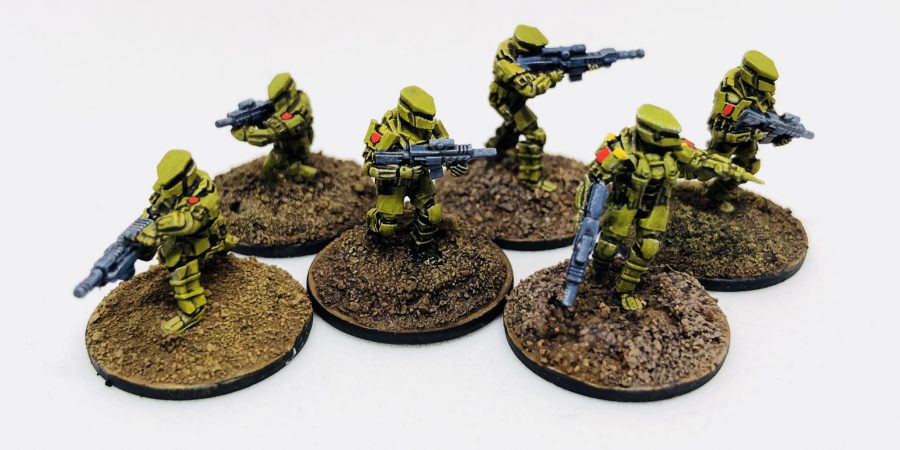 The MTU infantry are available as three fire teams, Alpha, Bravo and Charlie, each of which contains six troopers, all with different poses. The troopers are in suits of non-powered, full-body armor. Weapons appear to be kinetic rifles, DMRs and machine guns.

I painted these in a light camo green (Vallejo Camo Green), similar in tone to the Mjolnir armor worn by Master Chief and the Spartans from the Halo universe. Details washed in with shading ink (GW Nuln Oil) and gun details picked out with careful dry brushing. Bases are 20mm fender washers coated with white tacky glue and then sprinkled with sand and then inked and dry brushed.

There are also sets of heavier, powered armor suits called Talos Exo Suits, that are significantly bulkier and more intimidating that the standard MTU troopers. The Talos troopers are equipped with large power packs integrated into the armor that power their weapons. Weapons appear to be fusion rifles, a belt-fed grenade launcher and a flamer. The stubby antennae on each model is very easy to break. I had to replace one with a short length of wire pushed into a hole drilled with a pin vise.

White Dragon has quite a few more sets of MTU infantry as well as mechs, drones, vehicles and terrain. Looking forward to getting my hands on these!