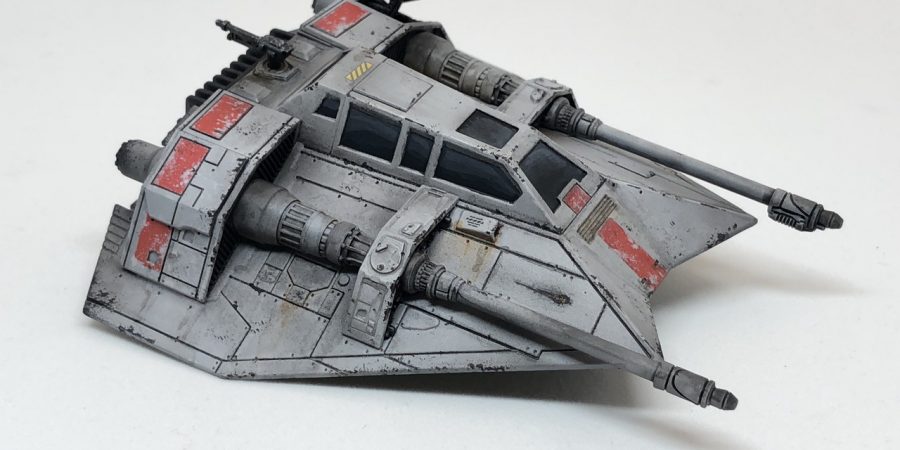 While I haven’t gotten into the Star Wars Legion game quite yet, I picked up a model of the T-47 Airspeeder, best known as the iconic Snowspeeder from the Battle of Hoth from Episode IV. This model is from Fantasy Flight Games Star Wars Legion line of miniatures and is scaled for 25mm humans, roughly 1/72 model scale. This airspeeder will be part of a snowscape diorama that will be presented as a gift but this post focuses on the airspeeder itself.

The model required only minor assembly, giving you the choice of airbrakes in open or closed position as well as a choice of rear-mounted weapon, either the classic harpoon gun or a blaster.

The casting was quite good although there were very visible mold lines along the rear heat dispersion fins. Since there are quite a few of the fins, it was pretty tedious to clean them up.

Since this is only my second model attempting weathering, I went a little too far before I remembered to lay down a layer of satin coat before proceeding with washes and pigments.

I went for a heavily weathered looked, like the snowspeeders from the Battle of Hoth with lots of chipped edging as well as oil and rust stains.

I went back over portions of the model with an airbrush, laying down dark gray in areas that would have been blackened with smoke or carbon staining such as the blaster cannon tips, around the repulsor drive unit intakes and rear thrusters.

Windows were painted with a very dark green-blue with subtle gradient up to a dark grayish blue to represent a reflected horizon/sky. A more realistic reflection would probably have been high contrast white and black to represent the snowy landscape of Hoth, but I’ll have to work up to that skill level.