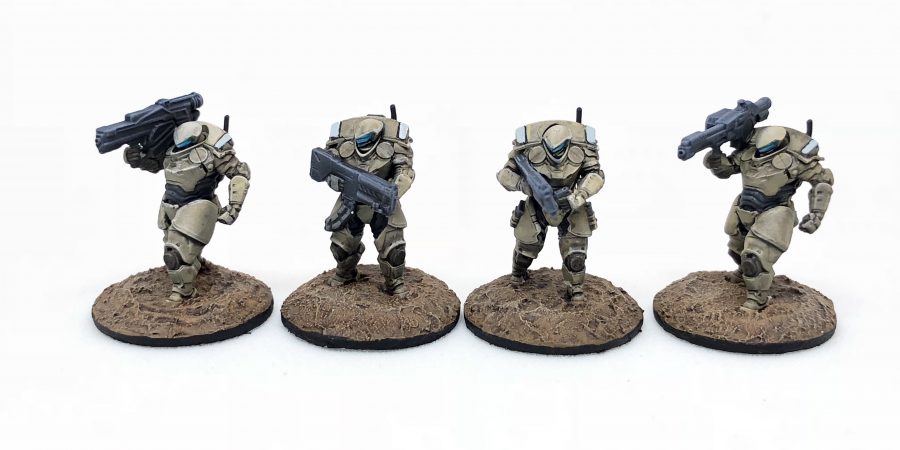 This is a pack of Talos heavy armored infantry from White Dragon Miniatures Marine Tactical Unit line. The pack comes with four troopers and one drone.

According to the flavor text from White Dragon, two of the troopers are escorts armed with carbines, one being magazine fed and the other belt-fed. One heavy weapon trooper is armed with a 2mm railgun for pinpoint fire against vehicles or mechs while the other wields a 30mm shoulder-mounted HEAT cannon for taking out armored or entrenched targets.

I don’t have the stand-alone drone miniature pictured here, but one of the escort troopers has a drone attached to his backpack. The drone looks suspiciously similar to a DJI Mavic Pro in its folded state, which is a cool little detail the designer slipped in.

The miniatures are up to the typical high quality of White Dragon with only a few spots where details seemed a bit mushy. Two of the troopers have subtle “stairstepping” on some upper flat surfaces that appear to be artifacts from 3D printing. There were slight mold lines that needed cleaned up, so I’m assuming the mold master was 3D printed and these miniatures are molded using a conventional process.

I went for an arid desert color scheme on this squad. I’ve become quite a fan of Badger’s Stynylrez Airbrush Primers and I used a combination of black base coat, followed by highlights of gray and white applied using zenithal coverage from above. I then used Badger Minitaire Mummy as the base color which I airbrushed on and shadows picked out with GW Nuln Oil. Highlights were then applied using Vallejo Bone White.

This is the first time I used Vallejo Diorama Effects Thick Mud as a basing material instead of sprinkling sand over white glue. The texture is quite nice, easy to brush on and gives more predictable results than the sand and white glue technique.